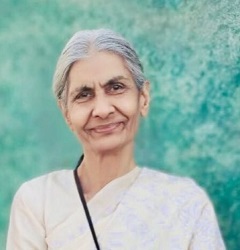 Professor Roop Rekha Verma taught philosophy in the University of Lucknow for 39 years, having broken past academic records at the undergraduate and postgraduate levels. She gained eminence as an academician very early in life, having published papers in some of the most coveted journals and having been referenced by some most eminent thinkers on the globe. Academic excellence soon got combined with her passion for social activism which she started when she was in her mid-twenties. Today she is recognized as a major voice against religious fundamentalism and conflict, violence on women and on many other human rights issues.

Professor Verma is known among the public as a woman of uncompromising integrity, courage and conviction. During her one-year stint as the Vice-Chancellor of Lucknow University she waged war against the criminal and corrupt elements on the campus for which she earned the fury of the political masters of the time. The public has seen her risking her life while working for peace in the situations of religious conflicts and interventions in the cases of violence on women and children. In a case of the gang rape of a poor minor girl Roop Rekha Verma was attacked in the court premises by a bunch of over dozen persons while accompanying the victim. She has faced serious threats while working for peace and harmony during some riot-torn situations. However, none of these had any effect on her work which continued with greater zeal.

Professor Verma established the Institute of Women’s Studies in Lucknow University in 1979 and acted as its Honorary Director and a faculty member till 2005. This Institute launched several campaigns and special programmes related to women’s rights under her leadership.

The social organization founded by Roop Rekha Verma, called “Saajhi Duniya”, has attracted well-meaning persons from different walks of life: literatteurs, teachers, students, artists and ordinary citizens .The organization has been working on different issues related to gender, peace, basic education and culture. Besides advocacy, training, sensitization and voice-raising, it also intervenes in cases of violation of human rights. It has fought more than 5,000 cases of women victims of violence and sexual crimes, rescued some tribal children from bonded labour , helped some farmers to rescue their land wrongly auctioned in controversial loan-deals and got primary school books changed for better gender sensitivity. Some details of the work of Saajhi Duniya are attached.

All this work is sustained by a large portion of Professor Verma’s meagre pension, occasional donations from some members and the energy of a team of some young volunteers . However, the work is increasing manifold, the objective conditions are becoming more complicated and the rising costs are making the lives of the volunteers more difficult . This has made the financial crises acute. The sustenance of the work in the midst of the ever-growing needs of the marginalised sections of society has become fragile, especially in the context of the increasing insensitivity of the official support systems.

No posts to show!